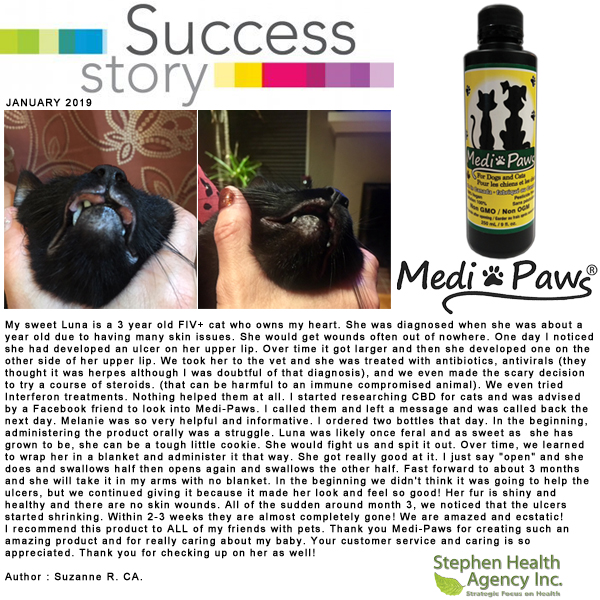 November 28, 2018
Just a follow up on Ms Luna. Honestly I don’t feel anything is going to cure the ulcers on her lip, but I will say I feel really good about giving her the Medi-Paws daily. It is becoming easier to administer it and she seems to enjoy the snuggle session we have when it’s done. (We wrap her in a blanket and I hold her and sing to her when it’s done). She now immediately gets over it and runs around and comes to the kitchen to get her breakfast. She seems to feel better than she ever has. She is even much for lovable than she’s ever been. (We think she was a feral as a baby so she’s not the most affectionate cat) She comes to lay on me every morning and just seems more laid back and confident. We are pleased and pray this helps extend her FIV life and keeps her going strong!
Thank you so much!

Photo: Suzanne (woke up to her paw on my face followed by little face kisses this morning)
Author Suzanne R. location CA 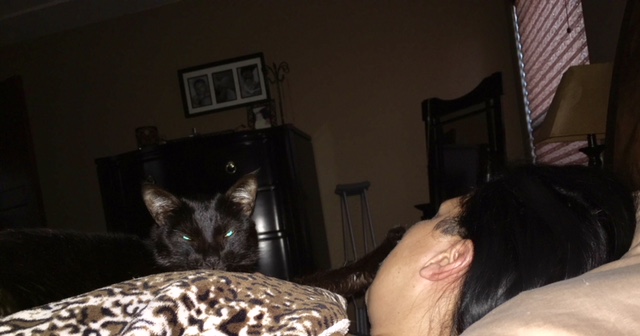 April 16, 2018
This is Kali she is our very much loved 17 yr old cat. Her Arthritis is so bad that she walks hunched over, (when she walks at all.) Sometimes just walking the couple steps from her bed to the water bowl is excruciating for her. She has to be lifted to get to her food and it’s been at least 3 yrs since she’s done done the stairs. She peed on everything because it hurts to much to get into the litter box. She swats and bites at you when you pet her. I called the vet about what to do but they didn’t have anything since besides her arthritis she’s a perfectly healthy cat.

Fast forward one month after starting her on Medi-Paws….

she moves around a lot easier she’s not as grouchy shes started using the stairs in turn using her litter box she no longer walks hunched over and she can jump up to her food dish…. (most days.) She has never been one for medicine but will sit with little fight so I can give her the Medi-Paws. Her overall appearance has changed her coat being oily and flaky to soft and flake free. And yes she still hobbles along but at a much quicker pace. It has worked wonders for her. My only regret is that we didn’t know about it sooner. 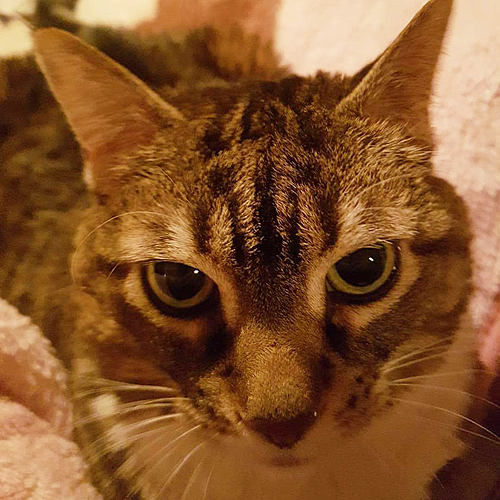 March 09, 2017
My cat was 14 and was really starting to struggle with arthritic pain. She could no longer get up on the bed or any of her other favourite spots. She just couldn’t jump up anymore because of the pain. You could see her discomfort when she walked.

Her fur was looking dull and was thinning. She was not a happy cat. I found this wonderful product at a Hemp Show in Calgary. I started to feed my cat this additive every day with her evening food.

Well, she turned 15 in February and you would never know it! She is active, can jump up again, her fur is fuller, softer and healthier. She is one happy and gorgeous cat again!

July 2016
Hi Melanie,
I just wanted you to know that I started to give Skye Medi-Paws® on Monday and I have actually seen an improvement! She used to sleep all of the time, and now she seems to be more alert and awake; playing more often  & following me around.  So far, I am extremely happy with how this is working for her.  For some reason I thought a measuring spoon or something would have been provided because of the dosage based on weight (her last weight was 11ish lbs). I’ve been giving her about 3/4 of a tsp every morning on her “treat” wet food. I can’t get her to take it without food yet, but I plan on going to the pet store to see if I can find a syringe for measurement and then try to give it to her that way. I know this isn’t a cure for her diabetes, but so far, she seems much happier!
Thank you so much!!!!!
Kori H., USA 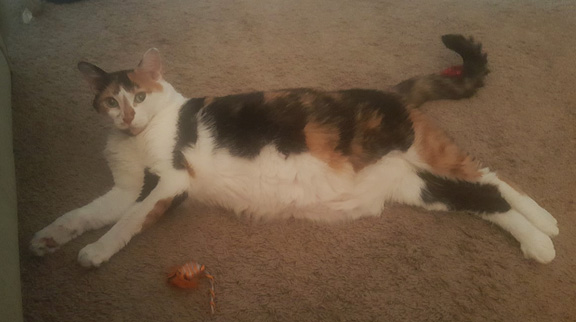 Dear Melanie,
Seven years ago I adopted a 4yr old cat by the name of Elvis, from the Ontario Humane Society. While in the shelter (although a vaccinated cat surrendered to the shelter by his owners) he contracted feline viral rhinotracheitis and within three days of coming home he had developed full blown pnuemonia. It took several months of veterinary care and antibiotics, but Elvis recovered fully. However, he was left with a chronic upper respiratory weakness and has small flare ups from time to time. A year and a half ago, Elvis succumbed to another full blown attack of FVR – He went missing for five days and some local children found him and brought him home … close to death.The vet treated him initially but then recommended that I euthanize him because she said he wasn’t going to recover and had developed liver failure from not eating while being too sick to do so. I went to visit him to say goodbye and elected to bring him home … “at least for a day”. Having had 14yrs past experience, working in the veterinary field, I knew in my heart that he didn’t have liver failure yet, but rather, had “fatty liver” from anorexia And I knew that I could get him to eat again and turn the corner back to health. But what to do about this chronic infection that was threatening his life? Sure, antibiotics would clear up this attack, and they did, and he did recover … but he can’t take antibiotics for the rest of his life, and I worried about when the next flare up would be, how severe would it be, and could he survive another serious attack.

That’s when I heard about Medi-Paws®. A friend heard an interview on CBC Radio and ordered some Medi-Paws® for her cats who also have chronic upper respiratory problems, and she told me about it. I immediately ordered some for Elvis. To make a long story short,Elvis is still with me a year and a half after his near death experience with FVR, and despite the vet declaring that he would not survive and should be euthanized. He just celebrated his 11th birthday on December 22, 2004. Medi-Paws® has kept the chronic upper respiratory infection under control. Elvis no longer sneezes constantly or suffers from the ongoing congestion that used to be a normal part of his life. He isn’t just ‘surviving’ either,he looks great and he feels great. So great in fact, that he has returned to his career as a ‘working cat’ Just yesterday he worked on a television show!